18 Dangers of the Charismatic Movement – The charismatic movement has invaded almost every church.  The charismatic gospel is a false gospel and here are 18 dangers from the Scriptures which prove that it is to be avoided at all costs.

66 Things Pentecostals Can't Find In the Word of God – The Charismatic movement has its own set of beliefs which are not according to the Scriptures.  Here are 66 things that charismatics will not find in Scripture even though they teach them openly but falsely.

Are There Apostles Today? – The charismatic movement claims that there are still apostles today on the level of those in the first century.  They even go as far as calling themselves Apostles instead of Pastors.  This study focuses on that issue.

Are There Prophets Today? – The Old Testament was replete with prophets whom God spoke through and penned His Word which eventually would become the Hebrew Scriptures in the Bible.  Are there prophets today who are receiving special revelation from God?  This study probes that subject.

Azusa Street - Birth of a Lie – In 1906 a phenomenon took place in Los Angeles which birthed the present charismatic movement.  It was an event which was mixed with much occultism but touted as a biblical event with prophecies and gibberish speech which they called tongues.  Read the article concerning this counterfeit spiritual event and how it began the modern tongues movement.

Dakes Bible – Dakes Bible is one used by the charismatic movement but its notes tend to confuse as they are loaded with false teachings thus keeping the already benighted charismatic further in darkness.  A very good analysis of the Dake Bible.

Healing – Do Christians really have the ability to heal or to command God to heal someone on their say so?  Or is healing symbolic of the gospel itself and was only performed as a picture of something else?

Scriptural Perspective on Tongues – A study on tongues from a strictly biblical perspective.

The Sign Gifts of 1 Corinthians 12: Are they still in force today? – The sign gifts which were in force in the times of the Apostles were needed when the church was in its embryonic stage but are they still active today?

Slain in the Spirit – One of the teachings of the charismatic movement is that of being slain in the spirit.  Is there such a thing in Scripture and if not then what is it and what does it mean?

Speaking in Tongues – A study on the speaking of tongues, is it for today or is the tongues of today something different than those of the first century?

Tongue Speaking – Tongues are a scourge on the church and sends Christians into confusion.  This article is a good treatise on the subject of tongues but please read the disclaimer at the top of the article first.

Tongues Phenomenon – Tongues is a modern phenomenon totally different than the legitimate biblical tongues of the first century embryonic church.  It is not for today.

Why We Don't Speak in Tongues – Tongues is a phenomenon which has taken over many churches and permeates the thinking of many Christians.  Find out why speaking in Tongues is not for the true, saved biblical Christian.

Women Preachers – In our day it seems many women have been taking the pulpit and becoming preachers and evangelists.  Does the Bible teach that this is fine or are they in direct violation of the commands of Scripture?

Word of Faith Preachers - What they Teach – The word of faith movement is very prevalent today in many churches.  Find out here what they teach and preach so you will be able to defend against it when you are confronted with its teachings. 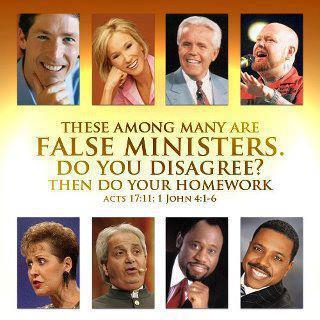